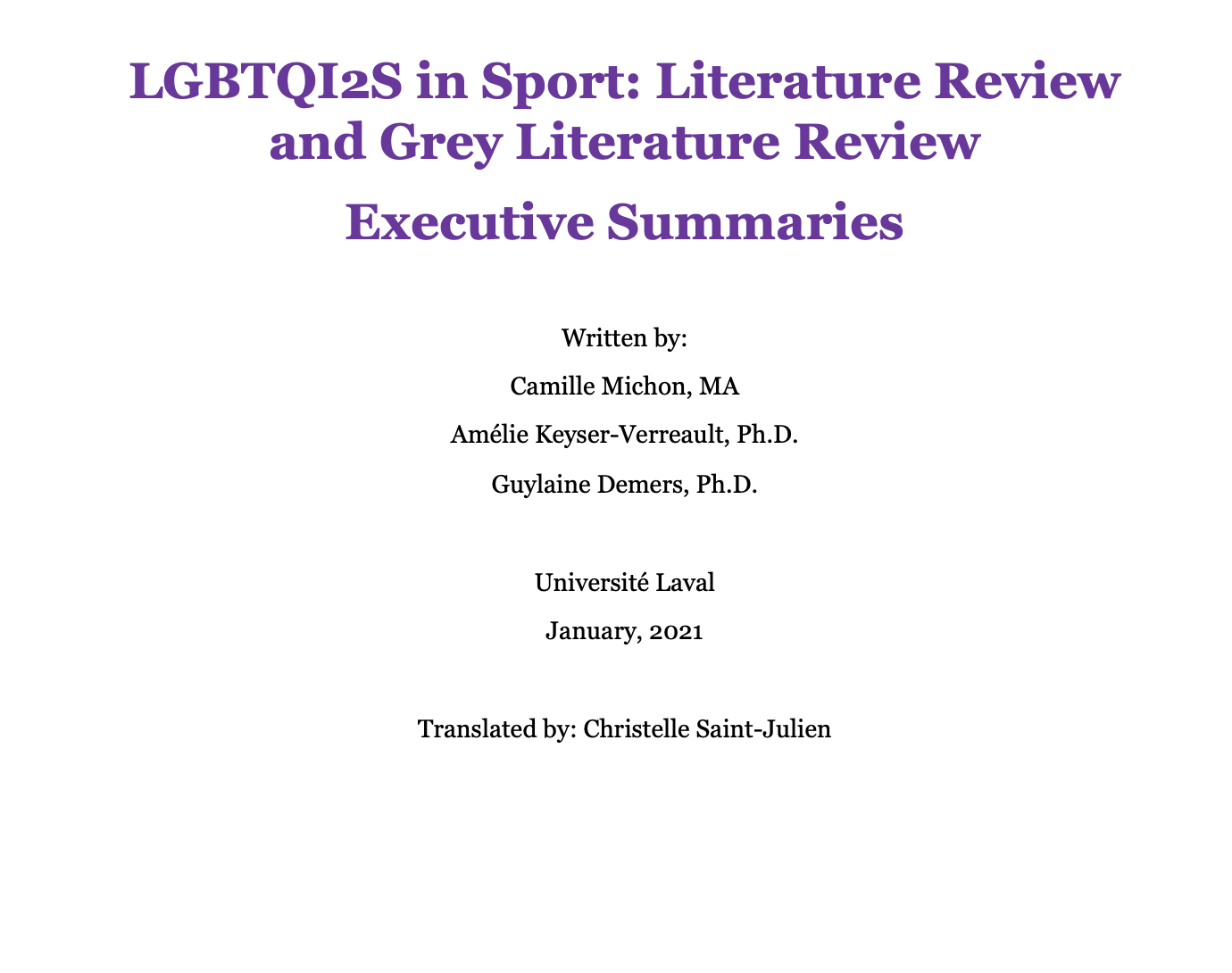 This literature review on LGBTQI2S was conducted for the Gender+ Equity in Sport in Canada Research Hub to serve as a foundational report for strategic research priorities development.

The review took place from May to September 2020.

Results (yield of n = 14 301) were limited by year (2000-2020) and English or French language. Initial findings were included (n = 218) when they were relevant after abstract review and excluded (n = 14 083) when we found duplicates, after title and abstract review. Grey literature will be additionally explored this November by browsing organizational websites like the Canadian Center for Ethics in sport (CCES), the International Olympic Committee (IOC), the Canadian Olympic Committee (COC), Canadian Women in Sport, Egale Canada, Égale Action, VIAsport, You Can Play and TransAthlete.

· LGBTQI2S in sport has been vastly explored in the last decade.Indeed, of the 218 previous scientific articles compiled to date, 172 of them (78.9 %) have been written in the last 10 years. In fact, over 50% (n = 116) of the studies cited in this review have been published since 2015, demonstrating the growing interest in this research topic.

· Varying contexts: From elite athletes and professional sports to school athletics, physical education and recreational sports. The first studies concerning LGBTQI2S in sport were conducted around elite athletes and mediatized events (e.g., Olympic athletes or Olympic politics, Gay Games participants, WNBA). These studies pointed out specific cases of elite athletes experiencing particular situations due to their sexual orientation (e.g., personal and public impacts of professional athletes’ coming out) or their gender identity (e.g., IOC’s gender verification methods, IAAF genetic screening of female athletes, IOC’s questions around transsexual athletes eligibility). Recently in research, many studies concerning physical activity courses (n = 17, from 2009 to 2020) and school athletics (n = 13, from 2009 to 2019) are conducted and they are representing another population that hasn’t been documented a lot in our subject of interest. Indeed, these studies tend to present the reality of young people and offer a large portrait of a situation instead of case studies. Hence, the studies tends to giving a portrait of what LGBTQI2S students or athletes are living (e.g., marginalization that LGBTQI2S youth and allies experience, problematic of changing rooms for trans students) and detail these particular types of environment (e.g., perceptions and experiences of teachers and trainers with LGBTQI2S students or athletes, specificities surrounding high school sport environment for LGBTQI2S individuals, initiatives of sensitization around youth transgender issues, queering pedagogy in physical education).

· Sexual orientation: Mostly around gay and lesbian in sport and homophobia.Since our literature review focusses specifically on women in sport, studies on gay in sport weren’t compiled in our selected articles. Though, through our research in data bases, it was possible to see that multiple studies around the subject have been done (e.g., gay athletes, sport participants, sports teams, sports leagues, events). The parallel with lesbian in sport studies is possible, since we found some of them (n = 13) on multiple themes (e.g., lesbian stigma in sport, silencing women coaches with non-normative sexuality, available sporting spaces for lesbian sexualities, impacts on sport and sponsorships of professional athletes’ coming outs). Something that was interesting in those studies was the fact that “gay-only” teams or leagues were discriminating of other sexual orientation or varying gender identities. The notions of “homonormativity”(King, 2008)and “gayborhoods”(Knee, 2019)were two revealing examples of this kind of hierarchy inside de LGBTQI2S community and also accurate to sport context.

· Gender identity: Focus on transgender athletes and their eligibility to compete. This is by far the most studied subject in our literature review with 53 articles on transgender or transphobia in sport, with the majority of them (n = 32 on 53, 60 %) published in the past 5 years. The majority of them draw a portrait of the sporting experience of specific transgender athletes as well as the barriers encountered in their journey, mainly in relation to their eligibility to take part in different levels of competition and discrimination they face in the sporting context. The only two articles on transphobia implied athletes in school settings in the United States and they highlighted the great disparity between policies and the measures put in place to integrate them safely (Acklin, 2017; Shrader, 2017).

· Research on queer sports or athletes is in growing popularity.Of all the topics surrounding LGBTQI2S in sport, queer athletes, queer sports, or queer theories in sports contexts are increasingly being studied (n = 13 on 218, 6%, majorly published between 2016 and 2020). Indeed, this subject is growing in popularity, as these studies mainly attempt to offer a sport context that is different from the one we are used to. Indeed, whether it’s in the context of physical education classes or organized sport, adopting a queer posture allows sport to break through pre-established frameworks and allow a greater number of individuals to recognize themselves in that specific context.

· Researches on specifics groups and contexts :

· Evaluation of politics and inclusion strategies

· What are the sporting experiences of intersex/bisexual (pansexual and asexual)/two-spirit athletes at all levels of competition?

· What are the sporting experiences of LGBTQI2S athletes from ethnic minorities (e.g., First Nations, African-American, etc.)?

· Are the inclusion politics or strategies at all levels of competition efficient to help LGBTQI2S population integrate, feel comfortable and stay in a sporting context?

· What are the long-term sporting experiences of LGBTQI2S sport participants from all levels of competition?

This grey literature review on LGBTQI2S was conducted for the Gender+ Equity in Sport in Canada Research Hub to serve as a foundational report for strategic research priorities development.

The review took place from November to December 2020.

A total of 34 organizations were consulted in detail to verify their implications concerning LGBTQI2S people inclusion in sport. Of the 34 organizations, 10 of them had no specific documentation on LGBTQI2S people or from the sporting context. The information collected as part of this grey literature review was varied such as training programs, online resources (e.g., information, guides), webinars, videos, blogs and news sections.

· The majority of the resources online aim to educate about the reality of LGBTQI2S people. Indeed, there is a wide range of glossaries, educational sheets, and scenarios to allow sporting people to have a common vocabulary and a better understanding of the particular situation LGBTQI2S people are living. There is also a great number of webinars and videos that are available to go into more detail in some topics surrounding LGBTQI2S people in sport.

· Organizations that support the cause of “women in sport” often have little or no resources specifically for LGBTQI2S people (e.g., She IS sport, She’s 4 sport, Égale Action). In an intersectional perspective, it would be interesting for this type of organization to have a component on the subject in their organizational mission. As a good example, Canadian Women & Sporthas a great section specifically on LGBTQI2S people in sport, and this could be really helpful for other “women in sport” organizations.

· The majority of the resources made available by the organizations consulted are about LGBT people. Indeed, the realities of gays, lesbians, bisexuals and transgender people in sport are the most documented, both from the resources and inclusion policies made available. Homophobia and transphobia in sport are two important topics and deserve to be further documented, however other realities are often very little explored like other sexual and gender minorities.

· As for organizations from North America and Europe, their information sharing is more voluminous and there are a lot of policies available, especially on trans people inclusion in different sporting contexts. There are also a few projects and campaigns that could inspire the Canadian organizations in order to promote sport practice within the LGBTQI2S community.

· Bring together the various current resources under a single platform (E-Alliance, Gender+ Equity in Sport in Canada Research Hub) in order to optimize their distribution and use.

· Develop content for sporting reality in Canada accessible in both official languages.

· Encourage current organizations to consider the realities of queer, intersex, non-binary, and all other sexual and gender minorities in their resources.

· Measure the concrete impacts of the initiatives that have been put in place in Canadian sporting organizations.