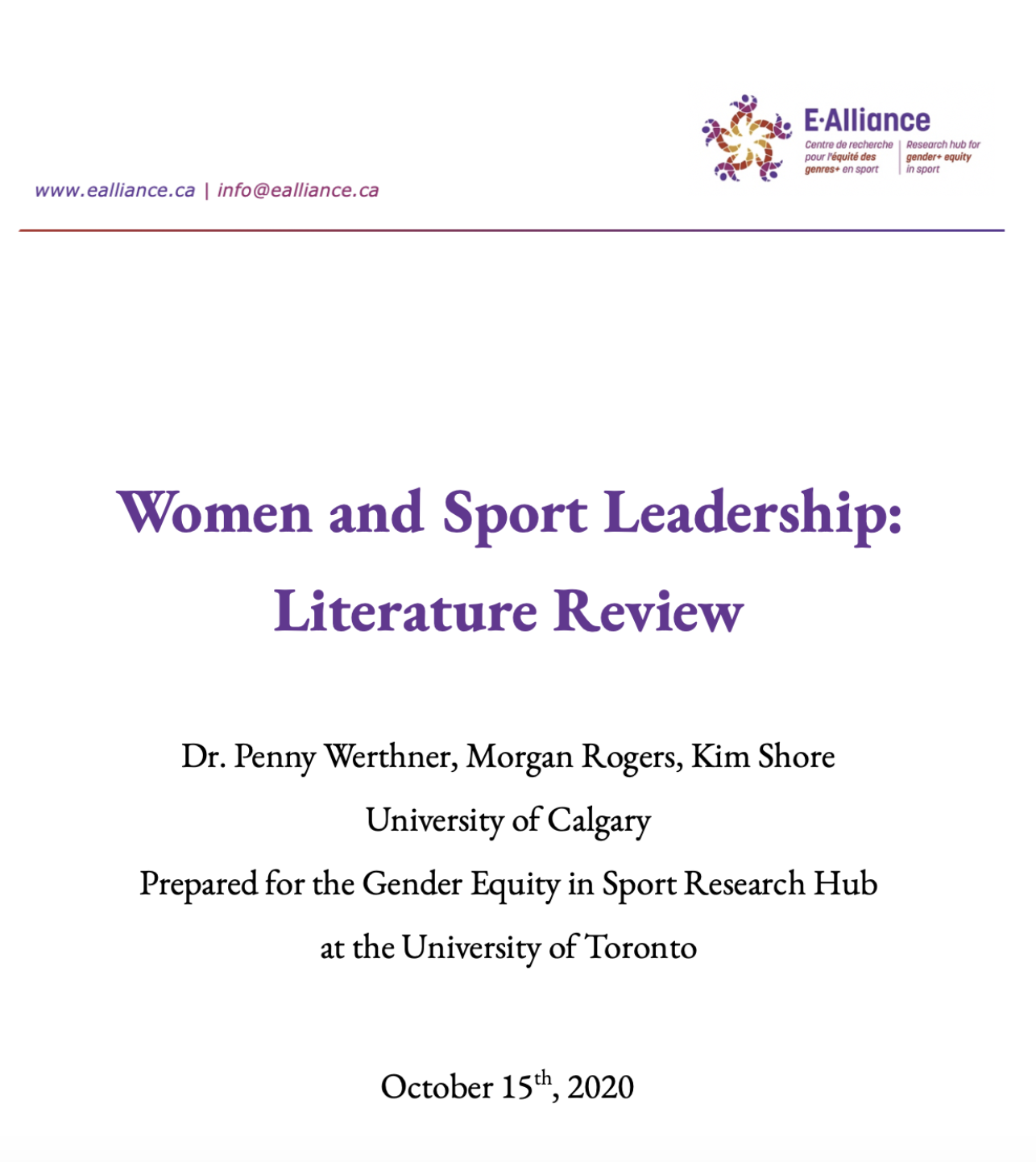 This literature review on women and sport leadership was conducted for the Gender+ Equity in Sport in Canada Research Hub to serve as a foundational report for strategic research priorities development.

The results of the initial search, inputting the key search terms listed above into SPORTDiscus database and the academic search engine, Google Scholar, yielded 1,100 articles, which were limited by year (2010 - 2020), peer reviewed, and written in English. Additional seminal pieces identified by research lead.

Abstract review of the 1,100 articles was conducted, from which 104 articles were selected to establish the baseline of existing research. Selection criteria required research focused on women in sport leadership (94 on women in sport leadership, 10 on women in business), written in English, peer reviewed, and exploring populations both in and out of North America (e.g., New Zealand, Norway, Britain, Australia, Canada, and USA). Nine hundred and ninety-six (996) articles were excluded when abstract review revealed the study was older than 2010 (with some exceptions), was a duplicate, was irrelevant (e.g., knee surgery, physiology, etc.), and/or was NCAA-specific (15 key NCAA articles were selected). Grey literature was briefly explored after this process.

This literature review is a foundational document for the E-Alliance Gender + Equity in Sport in Canada Research Hub. Led by Dr. Penny Werthner, the research team conducted a focused literature review of research related to gender equity in sport leadership. An initial review of 1,100 articles was conducted, with 104 articles, from 2010-2020, selected to establish a baseline of existing research. Selection criteria required the research be focused on women in sport leadership (94 on women in sport leadership, 10 on women in business), written in English, peer reviewed, and from a variety of countries (e.g., New Zealand, Norway, Britain, Australia, Canada, and USA). The key findings that emerged included the framing of androcentric leadership as gender neutral which places women in a ‘double bind’ (Burton & Leberman, 2017; Hovden, 2000), women still facing many barriers to reaching leadership positions (Burton & Leberman, 2017), quotas seen to be effective in achieving gender equity when implemented (Adriaanse, 2017), and mentorship and the burgeoning strategy of sponsorship being critical for career development and advancement (Banwell et al., 2019). Key gaps in the literature were also identified, such as the need for an intersectional approach (Burton, 2015), a greater understanding of what works for advancing women into leadership roles (Norman, 2018), and how to better leverage allies, mentors, and sponsors (Banwell et al., 2019). Based on the results of this review, future gender+ equity in sport in Canada research should focus on how to successfully implement quotas to ensure women in leadership roles at all levels of physical activity and sport, investigate ways to change the current paradigm of leadership and ensure inclusive and diverse leadership, and utilize the models of LaVoi (2016) and Burton and Leberman (2017) to explore changing the current sport system.

Leadership is “a process whereby an individual influences a group of individuals to achieve a common goal” (Northouse, 2013, p. 5)

Fierce leadership, as defined by Susan Scott (2009) is about “gaining the capacity to connect with your colleagues…. at a deep level” (p. 19).

Quotas and targets (in relationship to women’s leadership)

Power and personal or relational power

Women and sport leadership in Canada

Despite a strong presence of females participating in sport in Canada (e.g., Canadian women winning 72% of Canada’s medals at the 2016 Olympic Games, Demers et al., 2019), there is still a dearth of women in leadership positions in the Canadian sport system. There are some positives, such as women’s representation on Canadian sport organization boards having increased to 35%, and six Canadian multi-sport organizations, such as the Coaching Association of Canada and Canadian Paralympic Committee, have female CEOs (Canadian Women & Sport, 2020; Demers et al., 2019). However, in coaching, the proportion of women coaches has actually decreased, with women representing only 25% coaches across all levels in Canada, and only comprising 6% at the Olympic level (Banwell et al., 2019; Demers et al., 2019; Donnelly, Norman, & Kidd, 2013; Norman, Donnelly, & Kidd, 2017). There are slightly higher percentages in sport administration, with women making up 21% of athletic director positions in U Sports, 16% of the top paid positions in University sport, and 15-35% of leadership positions in NSOs, PSOs, and multi-sport organizations (Canadian Women & Sport, 2016; Demers et al., 2019). Demers et al. (2019) argue that a lack of accountability from the Canadian government perpetuates the lack of women in leadership, as there are no consequences for a lack of diversity and inclusion.

In the second round, the second research assistant (Morgan) eliminated all duplicates and irrelevant studies from the original database search and list of selected articles (e.g., removed those not related to women and sport leadership, such as women’s group exercise). Further sources were pulled from the reference lists of the original papers identified by Dr. Werthner, and from Burton and Leberman’s (2017) book, which was a key resource.

For the complete list of academic (and some grey literature) identified through this review, please consult the Gender+ Equity in Sport in Canada Zotero Library – Women and Sport Leadership section.

It is clear that organizational change must evolve beyond simply accommodating women into a sport organization’s existing structure, with gendered structures and cultural norms intact, and move toward transformative change that profoundly alters the gendered logic of that organization (Pape, 2020). The illusion of gender equity in sport has been created in some organizations, such as the IOC, which has achieved gender equity with respect to athlete participation at the Olympic Games, but, for example, female high-performance coaches only make up approximately 9-11% (Demers et al., 2019).

The implementation of gender quotas as a strategy for achieving gender equity have assisted the advancement of women into leadership positions in the business realm, as seen in Norway (Adriaanse, 2017; Torchia et al., 2011). Conversely, in sport, the implementation of quotas has received limited acceptance. For example, in Norway quotas were successful in business and government, but were not implemented in Norwegian sport organizations (Adriaanse, 2017; Hovden, 2012).

It can be argued that quotas can assist organizations in achieving gender equity, or a critical mass of women, which is achieved when there is a minimum of 30% female representation in leadership (Adriaanse, 2017; Kanter, 1977). Kanter (1977) outlines four classifications of organizational gender composition: uniform (100% one gender, typically male), skewed (<20% female), tilted (20-40% female), and balanced (>40-60% female). Kanter’s classification has been applied to sport (e.g., Adriaanse, 2016, 2017; Gaston et al., 2020; Wicker et al., 2020). Adriaanse (2017) notes that having 40% women in leadership is considered achieving gender equity. However, she argues that female representation is simply not enough, women must also be given equal weight in the decision-making process.

Beyond quotas, mentorship and sponsorship are critical to the development and advancement of female leaders (Wells & Hancock, 2017). Mentorship has been studied in-depth, particularly in coaching (e.g., Banwell et al., 2019, 2020). Banwell et al. (2019, 2020) examined Canadian female coach experiences of mentorship, and in 2019 highlighted that 96% of participants had received mentorship and felt it was beneficial to their professional development. In 2020, however, a further study by Banwell et al. was conducted on the mentorship of female coaches and, while it was found that mentorship is beneficial at an individual level (e.g., increased confidence, expanded network), mentorship does not directly contribute to career advancement. As such, the concept of sponsorship has gained increased attention recently as a more effective strategy in advancing a woman’s career (e.g., Banwell et al., 2019; Cosentino, 2017; Wells & Hancock, 2017). Wells and Leberman (2017) highlight that sponsorship transcends mentorship in that an individual in a position of power is advocating for a woman’s advancement into a position, rather than only providing career advice for professional development.

Mentorship and allyship constitute two areas requiring further research, but appear to indicate potentially viable strategies. In conversation with Dr. Laura Burton (2020), she argued that identifying and engaging male allies is key to moving forward. E-mail correspondence with Dr. Nicole Lavoi (2020) echoed a similar sentiment that although more research is still required on existing systemic supports that help women stay in coaching roles, improving our understanding of how to enlist or invite male allies to help change the system could prove fruitful. A 2017 Harvard Business Review article discussing the value of male allyship notes that men are allies in private (i.e., they support gender equality) however are not allies in public (i.e., do not act on their support). Women striving for career advancement are often encouraged to seek mentorship from other women who have had success. However, Sheryl Sandberg, COO Facebook, stated that women seeking mentorship from senior management within their respective industries must turn to men in leadership roles because there are still too few female senior leaders (Elle Magazine, 2018).

Limitations of populations and identities engaged

Existing Gaps in our Knowledge