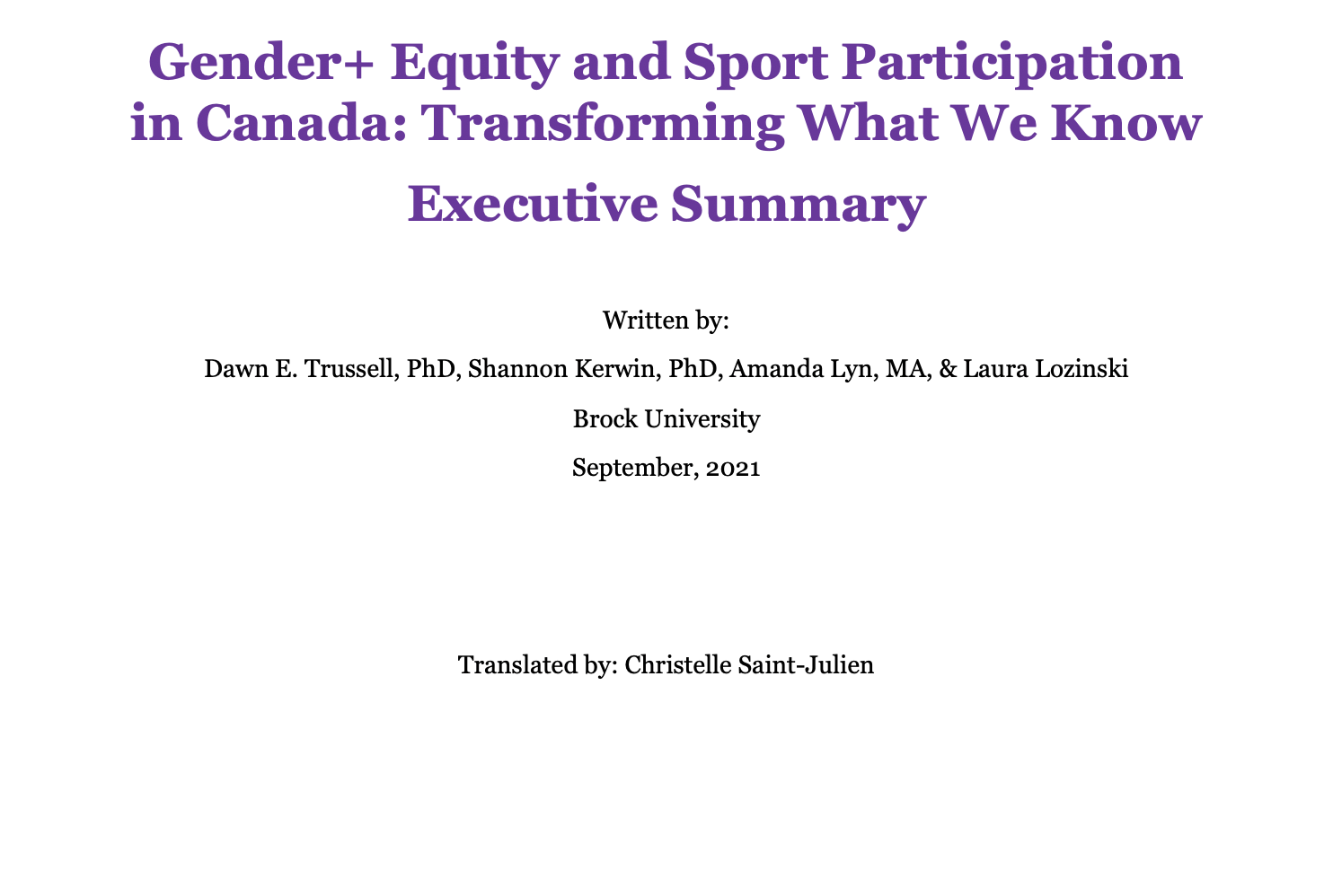 Gender+ Equity and Sport Participation in Canada: Transforming What We Know- Executive Summary

This literature review on “Participation” was conducted for the Gender+ Equity in Sport in Canada Research Hub to serve as a foundational report for strategic research priorities development. 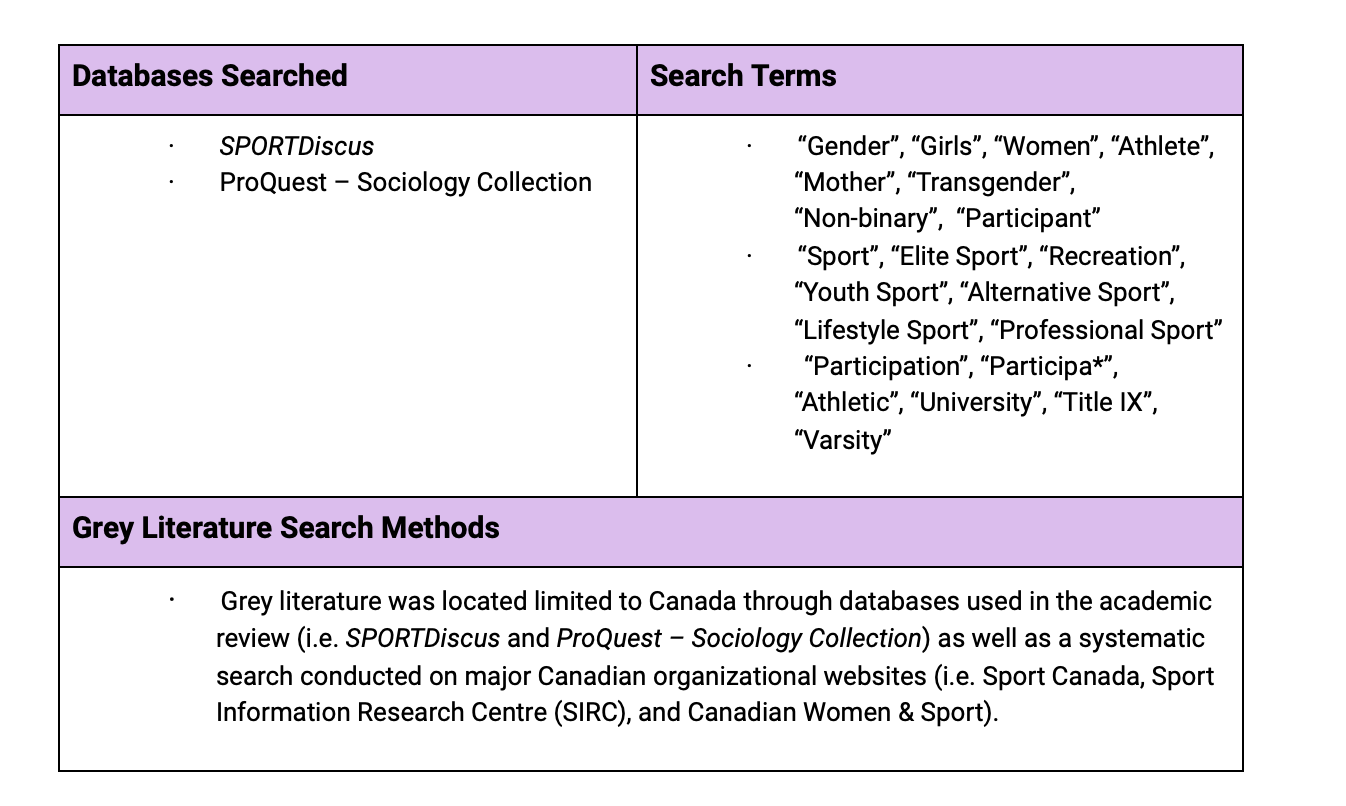 Results (yield of N = 332) were limited by year (2000-2020) and English language. Findings were included (n= 305 (academic)+ 27 (grey)) when determined relevant after initial abstract review and scanned for commentary on gender/sex related to sport participation. Specifically, articles were excluded when not specific to gender, not focused on participation, duplicate articles, and/or were leisure or physical activity focused (e.g. walking, gardening) and outside of the definition of sport for this analysis. The search was divided into three phases. During the initial phase search terms such as “gender”, “girls”, “women”, “female”, “femin*”, “transgender”, “non-binary”, “cis-gender”, and “youth” were used alongside database filters of “North America” and “English language”. Through analysis of our exhaustive search term results (N=57 (28 ProQuest, 29 SPORTDiscus)), we came to realize that the search term “participation” was limiting and was not explicitly used throughout the sport literature. In other words, the concept of “participation” may be inherent in research related to gender+ equity but was not explicitlyidentified in the title, keyword search, or abstract. For the second phase, more results were found (N= 28 (13 ProQuest, 15 SPORTDiscus)) when the term was reduced to “Participa*” or other search terms such as “inclusion”, “athlete” or “Title IX”, “mother”, “participant”, “athletic”, “university”, “varsity”, and “policy”. The lead researchers also provided Canadian author names (from diverse fields of study in sport) to include in search terms (e.g., Caldwell, Giles, Hayhurst, Hoeber, Paraschak, Van Ingen, and Young), with the same inclusion/exclusion criteria as above. Through this search strategy N=5 additional articles were added to the collection. In the third phase, “English language” and “North America” were unselected in the database filters and an additional N=215 academic journal articles were included in the results with the same inclusion/exclusion criteria as phases one and two.

The grey literature (N=27) was limited to Canada through databases used in the academic review (i.e. SPORTDiscusand ProQuest– Sociology Collection) as well as a systematic search conducted on three major Canadian organizational websites (i.e. Sport Canada, Sport Information Research Centre (SIRC), Candian Women & Sport). We searched the databases and browsed the websites using our search terms adopted in the academic review and reflected on the work of our contacts in this space. It is important to recognize that the initiatives and resources that are outlined represent a perspective from three dominant organizations in Canadian sport culture. We challenge future searches to move into grey literature spaces that intersect with other marginalized communities (e.g., Indigenous communities, New-comer populations) who most certainly engage with other literature to inform their practices.

· Lack of literature on gender and sport participation that is interdisciplinary.

· A large body of research exists where gender/sex is a variable of interest (e.g., control variable); however, the meanings and experiences of women, girls, and gender diverse identities remains a growing, yet limited, focus of study.

· Limited intersectional understanding of gender with other social identities.

· The term ‘participation’ is difficult to locate within databases with a complex, interconnected family of terms, concepts, and assumptions that surround the concept.

· Establish a line of research that focuses on sport participation that recognizes the intersectionality (gender, race, sexuality, ability, ethnicity, class or caste) of experiences for girls, women, and gender diverse identities.

· Remove fragmented exploration of participation to understand and respect a broad array of sport participation experiences for girls, women, and gender diverse identities.