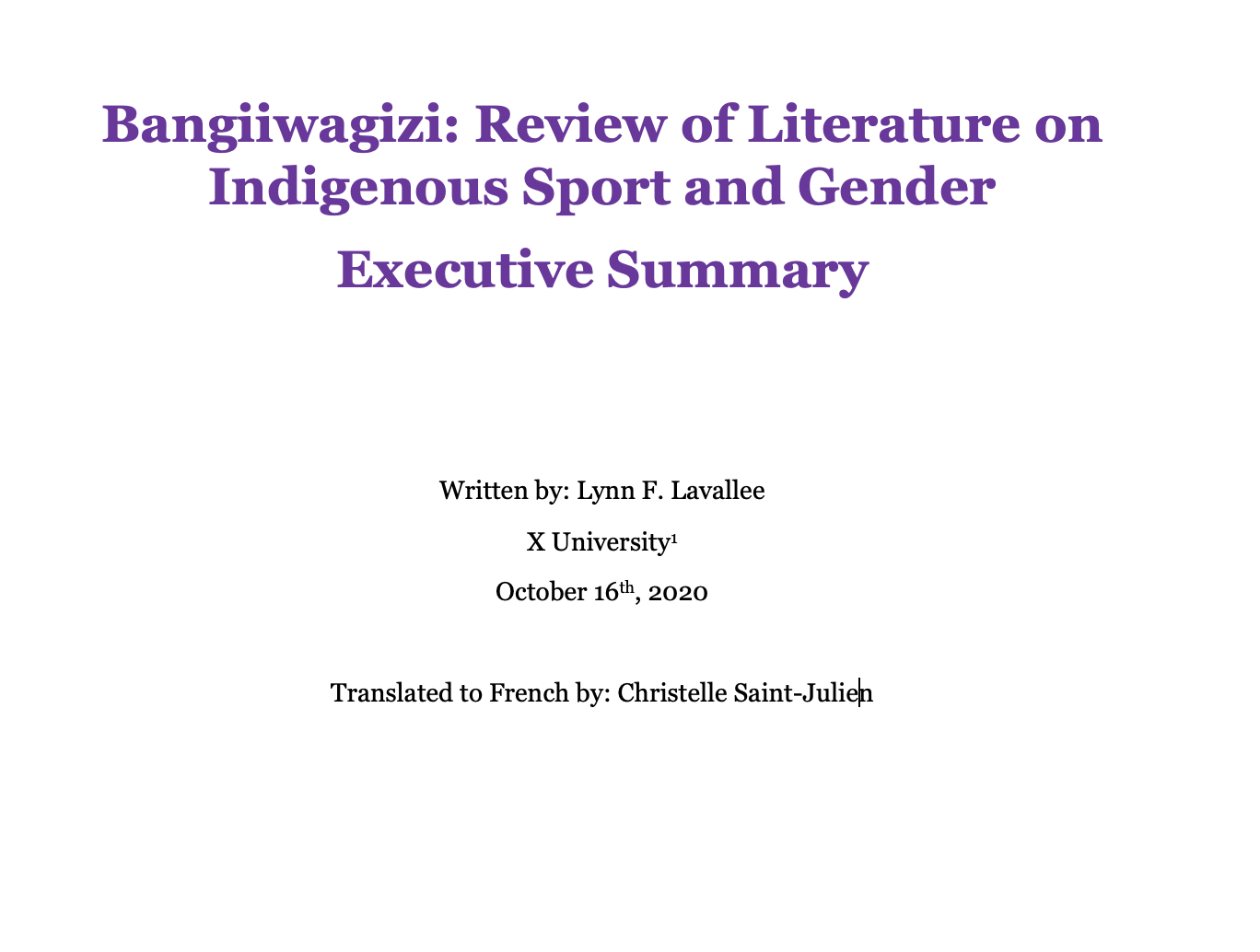 [1]Publisher’s note: The publisher has elected to use the name X University. In 2021, X University was the name used to refer to a downtown university in Toronto, Canada, in protest of the university’s official name whose namesake was widely understood as having had a central role in Canada’s residential school system. Later that same year,the university accepted 22 recommendations of the Standing Strong (Mash Koh Wee Kah Pooh Win) Task Forceit had assembled, one of which was the recommendation to change the institution’s official name (without vilification nor vindication of the individual after whom the institution had initially been named). At time of posting, the new name had not yet been decided upon.

This literature review on gender and Indigenous sport was conducted for the Gender+ Equity in Sport in Canada Research Hub to serve as a foundational report for strategic research priorities development. 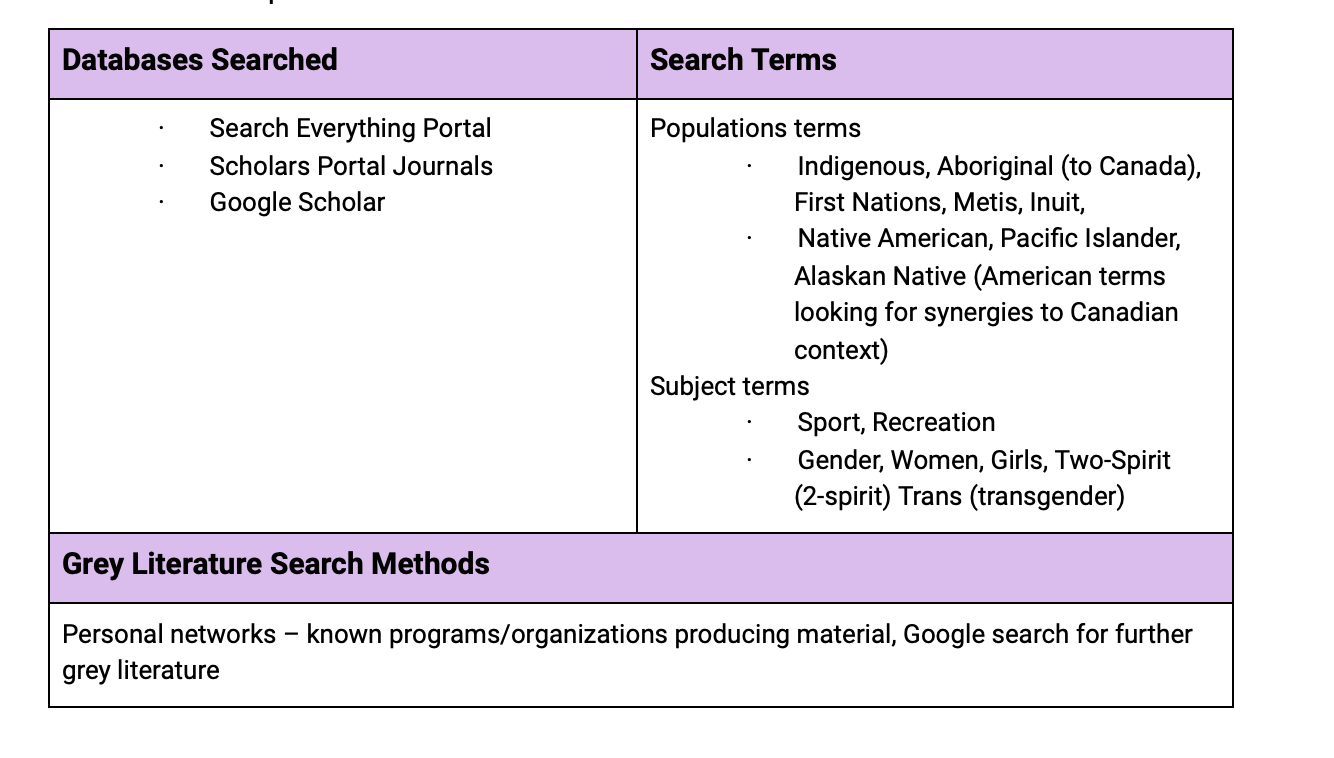 Results (n=117) were generally limited by year 2016-2020; however, given the paucity of Indigenous women/girls/2 spirit/trans (WG2ST) sport literature specific to Canada, seminal pieces older than 2016 were identified by the research lead and included in this review. The search term yielded many results from Australia. While this literature may be explored at a later date it was excluded for this review. The search included terminology used in the United States to describe Indigenous peoples; however, only the literature that included Indigenous peoples from Canada was included in the review. Finally, some of the Canadian Indigenous specific literature that was inclusive of all genders was included if specific findings about women and girls was included. Finally, a cursory grey literature review was conduct via Google search for material from 2016 onward that included some of the search terms noted above, as well as specific communities and organizations known to the research lead.

· There are a few researchers who have focused on the history of women and girls Indigenous sport; however, there is no historical literature reflecting 2-spirit and/or transgender involvement in sport.

· Health promotion was the focus of most of the literature found where the importance of looking at sport and physical activity from an Indigenous lens is fundamental. Studies exploring the importance of sport or physical activity on behavioural risk factors and obesity are being replaced by decolonizing approaches to research that explore the ability of sport to have holistic impacts on health.

· Literature focusing on participation in sport for Indigenous women and girls highlights the importance of sport in resisting anti-Indigenous racism, colonialism and patriarchy.

· Sport can be a mechanism for activism and Indigenous resurgence.

· Anti-Indigenous racism and patriarchy are reported experiences in sport environments

· Indigenous culture and ceremony are important consideration to be imbedded in sport delivery and research.

· Role models are woven into the experiences of Indigenous peoples in sport.

· There is a favouring of boys and men in Indigenous sport.

· Indigenous WGWST are still invisible but not absent from sport.

· In general, there is a paucity of literature focusing on Indigenous GW2ST in sport.

· There is a complete absence of literature focusing on Indigenous 2-spirit/transgender people.

· Activism through sport and physical activity can be further explored, both for historical accounts and current initiatives happening across the country.

· The involvement of Indigenous GW2ST people in sports across Canada needs to be further explored with respect to enhancing sport participation.

· Indigenous GW2ST leadership in Indigenous sport governance is not addressed in the academic literature.

o What are the experiences of 2-spirit and/or transgender children, youth and adults in sport?

o How can more Indigenous GW2ST be encouraged to become involved and stay involved in Indigenous sport governance?

o What are the barriers or challenges to involvement of Indigenous GW2ST in Indigenous sport governance?

o What is the value of sport from Indigenous GW2ST perspectives?

· How can awareness of GW2ST Indigenous athletes and role models be profiled?

· Experiences of anti-Indigenous racism and misogyny in sport.

o What are the experiences of GW2ST athletes/participants with anti-Indigenous racism and misogyny?

o What can be done to address anti-Indigenous racism and patriarchy in sport for Indigenous GW2ST?